I've been using the same Onyx A/M 24 Deluxe inflatable life jacket for over 3 years now. I've enjoyed it so much that I just purchased another Onyx A/M 24 for a family member. The Deluxe has side pockets whereas the non-Deluxe does not. Below is a quick review and some pictures. You can buy the Non-Deluxe version for just under $100 on Amazon. The Deluxe version isn't currently available via Prime but you can still buy it from these sellers.

What I love about this inflatable life jacket is that it has both "automatic" and "manual" inflation modes, and it's easy to switch between the two. I talk about that in the video. The jacket uses a compressed air cylinder and the entire unit is very compact.

This isn't an offshore-ready jacket, but it's great for coastal cruising.

Here are some pics of the Deluxe & non-Deluxe jackets: 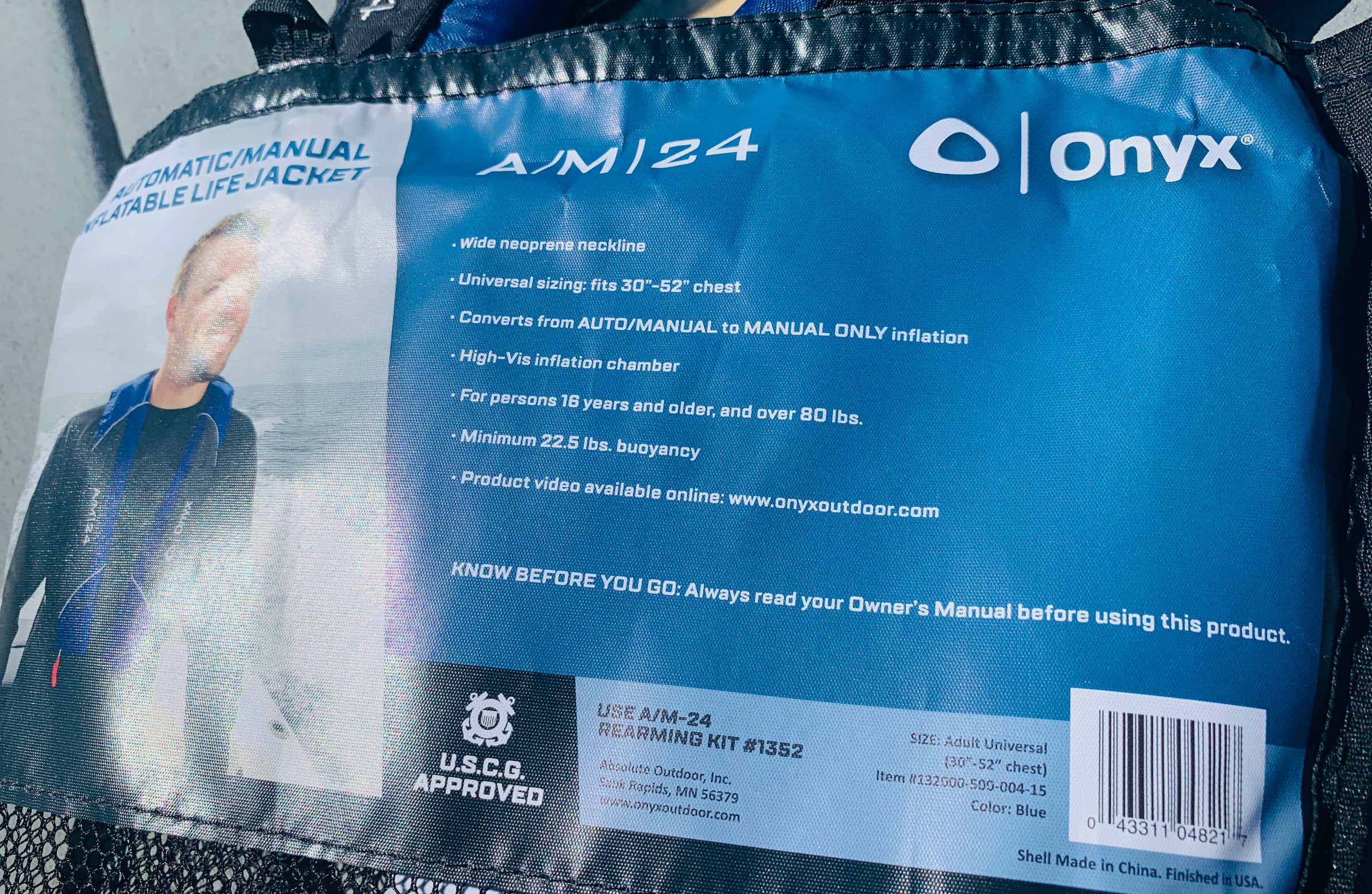 Shorten your commute by 6x with an electric scooter

I've been on a journey to find the absolute best commuting scooter with the right combination of cost, power and size. I had very high hopes for Cycleboard, but had a horror story of an experience with them and absolutely cannot recommend them for a multitude of reasons, including:

So in short... I recommend you stay from Cycleboard, sadly.

When our first daughter Devina was born, we decided we weren't going to have her interact with electronics until she could create with them . We want our children to be creators, not just consumers, of technology. She's now three years old, and we've been looking for the right way to introduce her to technology. After a lot of looking, we've found something amazing -- a system called Osmo. (About $95 on Amazon plus $30 or so for each add-on kit).

Osmo works with an iPad -- we're using an old iPad and it's been fully compatible -- with a system of software + physical pieces, as well as a red mirror that covers the iPad's camera, focusing the camera on the table just in front of the iPad.

The genius of Osmo is its range. There's Osmo software for putting colored shapes together, for drawing , for math, for coding , for cooking , and more. It's an expandable system that's designed for ages 4 through 12 (although our three year old has been totally into it), meaning it can grow with a child for quite a while, which isn't something that can be said for most learning systems. That's the magic of software.

We are renting out our two bedroom guest cottage, which is situated on a private estate in Belmont, CA.

Here's a video describing the house and grounds:

Giving Experiences Instead of Gifts

The Odio family celebrating the Holidays

Sue and I have a family tradition we are pursuing: Giving experiences, instead of gifts, on birthdays and holidays.

For Devina specifically, if we sent you a link to this post, it was because you told us you wanted to buy her a gift. We ask that instead of buying her a physical gift, please either:

Languages are a beautiful thing. Although I grew up mainly speaking English, I had an opportunity at a very young age to learn and speak Spanish, and my dad's family is all in Costa Rica so I have family members who I primarily speak to in Spanish. That gave me the tools I needed to work in Argentina and Brazil for part of the time I was with GE. GE would've never sent me to Latin America right out of college if I hadn't had those language skills. Sue and I want Devina to have that same kind of opportunity.

Sue is in a similar (but stronger) position with Korean, as she speaks it primarily with her parents, and always did growing up. So we have an opportunity to raise Devina speaking multiple languages, but we knew that figuring out a way to do so would take work, because Sue and I speak to each other in English.

So we agreed that, from the start, I would speak to Devina exclusively in Spanish, which I've been doing for the past six months. At first, I didn't know if it would be hard or easy because it's been a long time since I've gotten an opportunity to speak in Spanish on a regular basis. And while it's not hard, it's not exactly easy, either. It's kind of like going into a room in a house that you don't enter very often. You haven't forgotten where things are, exactly, but you need to do a bit of spring cleaning to really make the room usable again.

But a funny thing has happened since I've forced myself to speak to Devina exclusively in Spanish: When I look at her, my brain now automatically switches to Spanish. Whereas at first it was strange to break out my Spanish on this new person in my life, now it would be strange to speak to her in anything other than Spanish. I wasn't expecting it to be so natural, because in the past I've either spent the entirety (or at least) bulk of my interactions speaking entirely in Spanish (or Portuguese, which I can handle fairly well) -- for example, when in a Spanish speaking country-- or entirely in English while here in the US. It's always been natural to be speaking Spanish when others are, and English when others are, but this is the first time in my life where I'll be speaking with Sue in English, and then turn to Devina to say something in Spanish, and then turn back to Sue and say something in English, over and over again. I thought that part of it would be hard, but it isn't. My brain switches between the two as if on cue.

Sue and I want to keep electronic screens away from Devina at least until she's a couple of years old -- this means no TV in our house, no iPad or iPhone for her to play with, or any other electronic gadgets. This might be surprising to hear considering how techie we are, but we see technology as a double-sided sword: It's incredible, but it also distracts from the things in life that really matter: Interacting with people, with nature, with our world around us. Showing love and learning to be loved by those who are important in our lives, and a list of other things, many of which we outlined in our Family Manifesto.

One of the first experiences we are hoping to teach Devina about technology is by way of computer programming. We want her to learn how to create with technology, vs. just being a consumer of it. So we plan on teaching Devina to code at a young age.

We don't yet know how (or exactly when) we're going to do that, but we've been starting to bookmark resources where others have done the same thing. I'm going to use this blog post as a place to put links to those resources, and to share this journey as we take it.

I'd also love to hear from other parents out there who are teaching their kids to code. I'd love to know things like:

How to Get a Screaming Deal on a Baby Jogging Stroller

Devina in her first race, an 8k, with dad and uncle Sam!

As I've mentioned before on this blog, Sue and I are not planning on buying a stroller because we want to carry Devina close to us as much as possible, to maximize our 'skin-to-skin' contact time. So to that extent, I did a pretty in-depth review of baby carriers, and the Baby Bjorn ONE took the prize in a last-minute upset.

However, I've always wanted to take Devina on races with me, and so I went on the hunt for a great jogging stroller. After doing a bunch of research, I found the Chariot line of strollers, which Thule picked up awhile back, so now they're branded as 'Thule Chariot.' Their top of the line jogging stroller is the CX-1, which MSRPs at $1,049.95. Yikes.

But here's a pro-tip: If you are willing to pick up one of the CX-1 strollers just branded as "Chariot" and not as "Thule Chariot," you can get one of those for $697 on Amazon -- and that's with the jogging attachment, which usually runs an additional $75. But there are only four left on Amazon, so they won't last forever. The differences between the old model and the new Thule model are very minor; the biggest one being disc brakes vs. drum brakes.

Baby Carrier Face Off: Our Quest to Avoid Hip Dysplasia

Sue and I have known from way back that we want to have as much skin-to-skin time with our daughter as possible. In fact, we haven't even purchased a stroller because we want to carry Devina to achieve this goal.

Originally, we were using a Britax carrier which was given to us by some friends, and I loved. But we started reading blogs which warned of issues that could arise with carriers that leave a baby's legs dangling, which the Britax (as well as a Baby Bjorn carrier we had) did. Specifically, articles like this:

Here it is illustrated:

Considering a Vitamix Blender -- Anyone Have an Opinion?

Three years ago, I reviewed several juicers in detail before settling on the Omega masticating juicer, and it's been great.

But ever since, my buddy Frank has been trying to convince me to get a Vitamix. He says he uses the Vitamix several times per day, vs. less than once a week for his juicer. I was over at his house the other day, and he gave me the full court press sales pitch. So of course I video taped it! Let me know what you think: Is a Vitamix more useful than a Juicer?

Also, the Vitamix isn't cheap! The 750 professional series is $650 on Amazon. There are cheaper ones though, as low as $481. If you don't mind refurbished, you can get an older open box version from Amazon Warehouse for the mid $300s.

Take a journey with us as we learn to take insanely great pictures.