The 411 on 4x4s: Open Differentials vs. Limited Slip vs. Locking (and what the jargon means)

This post was originally posted by me on a different blog on Nov 7, 2011:

If you’re considering an overland vehicle and 4×4 capabilities are important to you, then you’ll probably be as interested in this topic as I was when I started really researching the capabilities of various types of 4×4 vehicles.

First, the caveat:  Some of this is new to me, so if you see any errors here please say so in the comments.

I’ll define an “all wheel drive” vehicle vs. a “4×4″ vehicle as the difference between having a “low” range.  A low range selector specifies different gearing in the transfer case, giving the vehicle many times more power due to the lower gearing.  So for example, certain models of the Honda Element are “AWD,” because it delivers power to all four wheels while a Jeep is a true 4×4.  (Speaking of Elements, if you want a cool camper option for an Element, check out the ECAMPER — but that’s off-topic for this thread.)  In this thread I’ll only be referring to true 4×4 vehicles.

What the jargon means: Open vs. Limited Slip vs. Locking Differentials

(If you don’t know what a differential is, take a look at this video before you read the article below.  Skip to minute 1:50 unless you want to see the cheesy motorcycle antics!)

Even though many brands advertise their vehicles as having four wheel drive, the truth is that due to the open differentials on the axles, power only goes to the vehicle with the leastwheel grip.  An open differential is necessary on paved roads because the outside wheel travels farther than the inside wheel in a turn, but on trails or off the beaten path, a fully open differential will only cause you problems.

Auto manufacturers work to correct this problem with “limited slip” differentials.  These are still open differentials, but the slip is mitigated using several mechanisms:  Usually either the brakes or a change to the differential design.  The Toyota Tundra, for example (which we’re considering as the base of a camper) comes with something called “AutoLSD,” which sounds trippy but means something much more mundane: “auto limited slip differential.”  It engages the brakes of a the tire that’s slipping to send more traction to the tire that’s not slipping.  You can watch a video showing the difference between an open differential and AutoLSD here.

It’s imperfect though.  Braking the tire that’s slipping can cause the brakes to overheat, and as you can see from numerous videos like the one below, LSD is not the same as having your differentials locked.

Despite the locking differential advantage of the Titan, I’m still partial to the Tundra due to its superior performance in other areas and much better worldwide availability of parts over Nissan.  And if I really wanted to, I could install after-market locking differentials.

And that’s where it gets really interesting.  More about full locking differentials after these two videos, which showcase the differences: 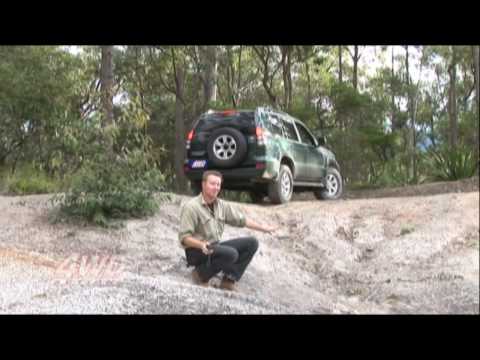 This post was originally posted by me on a different blog on May 21, 2012:

About the Overland Expo:

This is a three day event in its third year. It’s a mix of exhibitors and attendees who participate in overlanding, or want to get into it. Overlanding is a somewhat new term to describe self-reliant overland travel where the journey is the goal – what one might’ve called “traveling the world” before. Although we’re interested in taking a boat around the world at some point, interestingly there is almost no overlap between overlanders and those who travel by sea, despite the vast similarities. The closest we came to seeing a crossover is the Turtle V vehicle created by Gary & Monika Wescott, who have been traveling the world in various vehicles for over 30 years. I took a video of Monika describing how they used marine-grade equipment in their Turtle V vehicle because the typical RV gear isn’t strong enough for extended overland travel.

The Day the Bus Died

I told this story the other day and then immediately thought, "Man... that's a good one for the blog."

As I wrote about in my converted school bus story, my friends and I used to have a school bus. We went on a lot of fantastic trips in it, but those stories will have to be for another day.

Our very last trip took us to Las Vegas. It wasn't meant to be our last trip, of course. It was just a short little jaunt to Vegas. Of the six passengers on the bus, half were part owners of the bus and half were just friends.